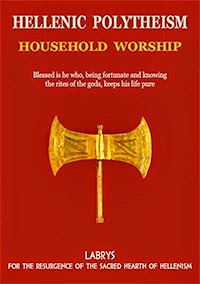 The first book of our community, "Labrys",  titled Hellenic Polytheism : Household worship was published a few days ago and as for some reason I never actually posted anything on the original Greek release I would like to say a few things now that the English edition is available.

First of all ,about how the book came into existence: Although there is an abundance of academic material available for the Hellenic religion, no book existed (In Greek), that could act as an introductory manual for those interested in actually following the religion instead of learning historical facts. Of course throughout the years, from within the community we have helped as much as possible those that approached us, or via our site, speeches, videos etc those interested in general, by giving guidelines on the most basic forms of worship, celebrations and other rites. Still we kept getting more and more questions and what was obviously needed was a practical guide that could enable one to start following our religious path personally.

With this in mind we decided to record these basic and necessary rites along with some simple explanatory texts for the most common things that we were often asked to explain. We decided to not delve deep into historical facts, theoretical debates  and things that can be found in any academic research on the subject, but instead focus on the practical things, as we know all to well that it's an entirely different thing to "know" about a religion than practice it. In addition, as we are still talking about a traditional religion we decided to include some important first hand sources on the subjects that needed some explaining as to what was written and why. Finally as the task seemed too demanding to accomplice once off, on top of everything else that the community was (and still is) working for, we decided to split our material and subject into two different books, the first focusing on household worship, which was also the most important first step for anyone wishing to privately follow the path and the second concerning the public festivals and such aspects of the religion.

For the English edition, apart from the same above reasons and the always supportive stance of all the members of the digital world polytheistic community, we decided that it would be important to have for the first time a native traditional voice heard abroad. Not that we do not find adequate or important all the work that has been till recently done on the subject by the non-Greeks, but still it seems odd that in its majority the contemporary Hellenistic movement is being dominated by non-Greek and probably non-traditional -that is eclectic- voices. Having the belief that modern Hellenismos should still be rooted in its place of origin, not to mention that the vast majority of contemporary believers are still here although hardly seen or heard abroad  we decided to proceed with the English edition as well, which would not be possible but for the translation (and not only) work of Lesley and Radamanthys.

On the technical side, the book is split into two sections, the first containing all the introductory texts and explanations already mentioned and the second the actual rituals, hymns, prayers etc (content screenshots at the end). The goal was to have a small concise edition that one could carry along, keep always near and navigate to the needed ritual to personally perform it. We hope that it will serve its purpose and on a first level give the initial push that many people need in order to start worshiping the Gods.

In the few days since becoming available online the book managed yesterday to climb to no1 place of Amazon hot new releases in its category (paganism) – thumbs up guys- and this shows the potential of our religious beliefs. For this I have to thank all the friends in the internet world that embraced the publication with such enthusiasm. Still the more important lesson is that Hellenism in its contemporary form (or forms) is a growing trend, and that it falls on to all of us to support newcomers and evolve our faith in the most respectful (which for us is tied with "traditional") manner. I honestly believe that in the near future we will all be proud of what has been collectively achieved.

Finally as I have already briefly mentioned online, we would welcome all reviews of the book once you have read it, as this will enable us to identify areas of interest or other things of importance to you, mostly to be used in the forthcoming title that is currently under development, but why not, in a second edition of this current title in the future as well. 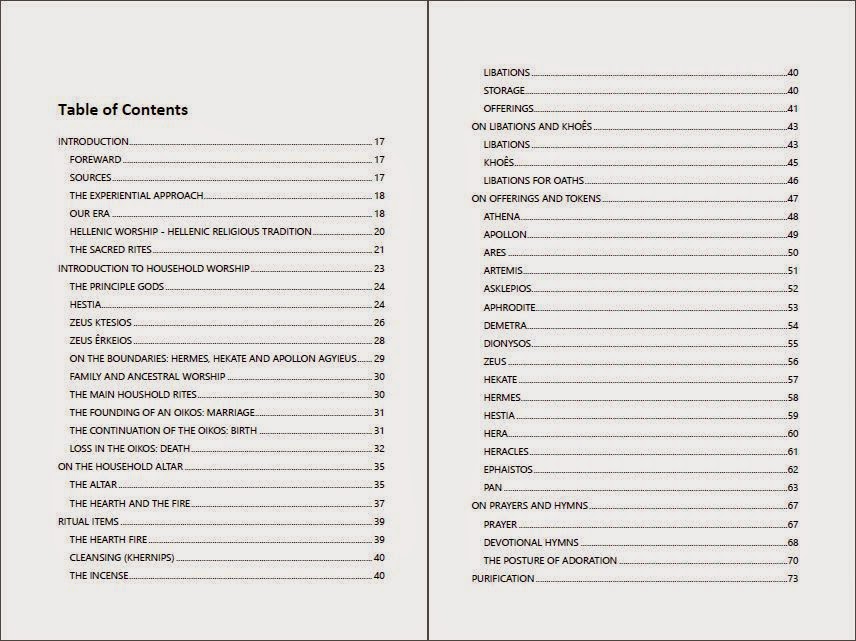 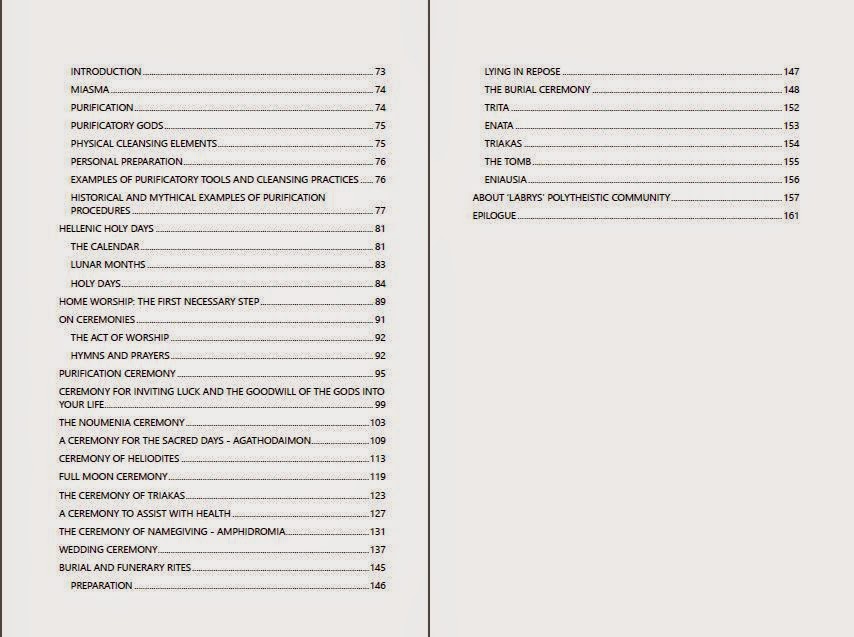 A minor correction for the table of contents: "The Principle Gods" should be "The Principal Gods." I'm looking forward to reading this!

"on the earth, all over it, a darkening of the world is happening: the flight of the gods, the destruction of the earth, the reduction of human beings to a mass, the preeminence of the mediocre"

"καὶ τὸ μυθῶδες καὶ ἀειδὲς σκότος τυραννήσει τὰ ἐπὶ γῆς κάλλιστα"
What I have felt the need to express and defend, belongs, in its most crucial and effective form, to a different world from that in which I happen to be living....'